Goodbye Wittgenstein is an ongoing collaborative project between the qujOchÖ artist collective in Linz, Austria and A3 Project Space in Birmingham, UK. Along with Trevor Pitt, Emily Warner and Mike Johnston, I was invited by A3 to join a month-long residency at Atelierhaus Salzamt, a residential studio in central Linz, to produce work responding to the philosopher Ludwig Wittgenstein’s time in Linz and Birmingham. An exhibition of our work opened on November 23rd 2016.

During his residency at Salzamt for the Goodbye Wittgenstein project, Pete Ashton has been exploring Linz using the phrase Ludwig Wittgenstein was taunted with by fellow students at the Realschule on Steingasse: Wittgenstein wandelt wehmütig widriger winde wegen Wienwärts (“Wittgenstein strolls wistfully Vienna-wards due to adverse winds”. Finding the direction of Vienna from the school, Ashton proceeded to walk as Wittgenstein might have, wistfully taking in this sample of historic, residential, municipal and industrial Linz, until hitting the Danube.

The work in the exhibition, across three walls, showcases attempts to represent this journey, and Wittgenstein’s relationship Linz, in a variety of ways, many explored for the first time during the residency. 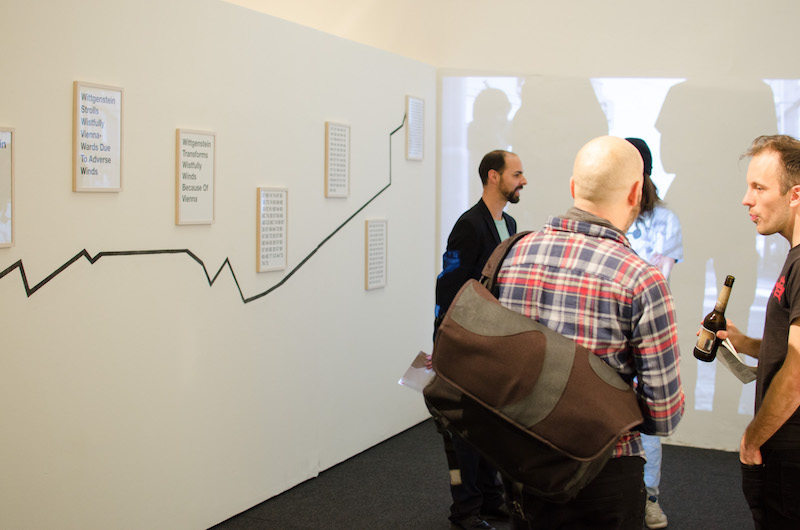 On the left is a black line tracing the route walked from Steingasse to the Danube. The taunt is framed above the school and as we away it is translated to English (correctly and badly), ASCII, hexadecimal, octal and finally the pure noise of binary.

In the centre is a large video projection of 1 minute static views from 36 points along the route. The early scenes are busy and unfocussed, leading to calmer, sharper scenes through the industrial areas (farmlands in Wittgenstein’s day) until reaching the river. 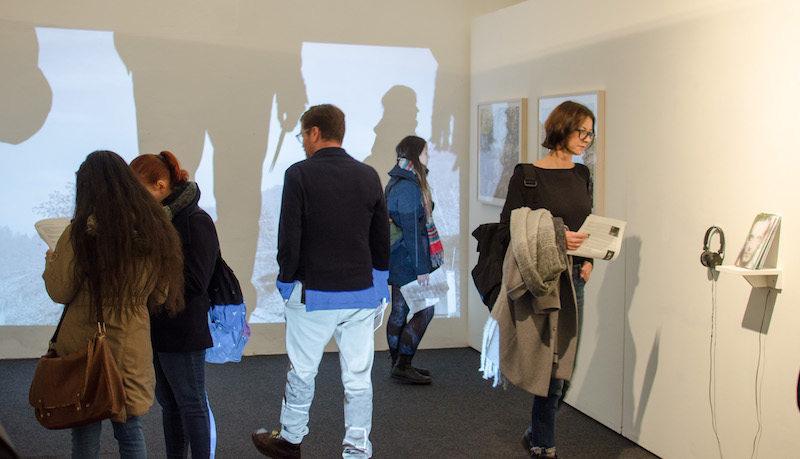 On the right are two algorithmic works.

The first is an automatic merging of 86 photographs taken by Ashton during walks along the route on November 9th, along with a charcoal rendering. The image is authored by Photoshop’s Auto Blend algorithm, a tool designed for focus-stacking and panorama stitching but used here on wildly differing images. The algorithm looks for the sharpest, boldest areas of the photos and combines them into a visually chaotic but mathematically ordered image. The charcoal rendering is produced by hand-tracing the projected digital image in the manner of a mechanical plotter or printer, submitting human creativity to the rule of the machine. Errors in the rendering are the result of glitches in the human-machine interface. Both these works are experiments in post-photographic realisations of camera-captured data.

Next to this is a hardcover publication of text generated with the torch-rnn neural network trained on Wittgenstein’s extant writings, seeded with the childhood taunt, creating original text using mathematical logic. The process is similar to the predictive text system on smartphones and has produced prose which, while utterly nonsensical, evokes the rhythm and feel of Wittgenstein’s original work. An audio recording of Apple’s VoiceOver accessibility system reading the text as if it were German increases the nonsense quotient and references qujOchÖ’s Meaning of Dictation from the original Goodbye Wittgenstien project in Birmingham. 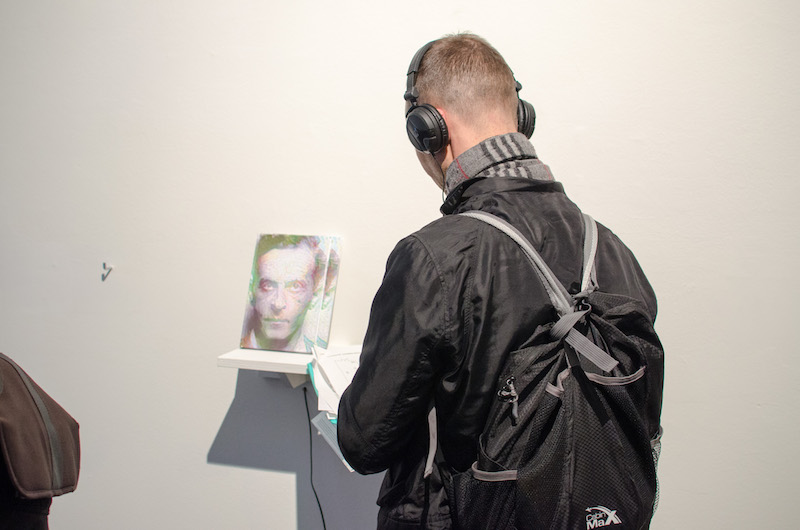 Pete Ashton is a multimedia artist creating transformative site-specific work. His practice explores the role of cameras as post-photographic data-capture devices, amongst other things. He’s an inaugural fellow at Birmingham Open Media, a collaborative workspace at the intersection of art, technology and science. He lives In Birmingham, NW Europe, with his wife, Fiona, and three rabbits, Bunminster Fuller, Clementine and Joy.

All photos from the group exhibition are in this Flickr set.

All photos of my work and process are in this Flickr set. 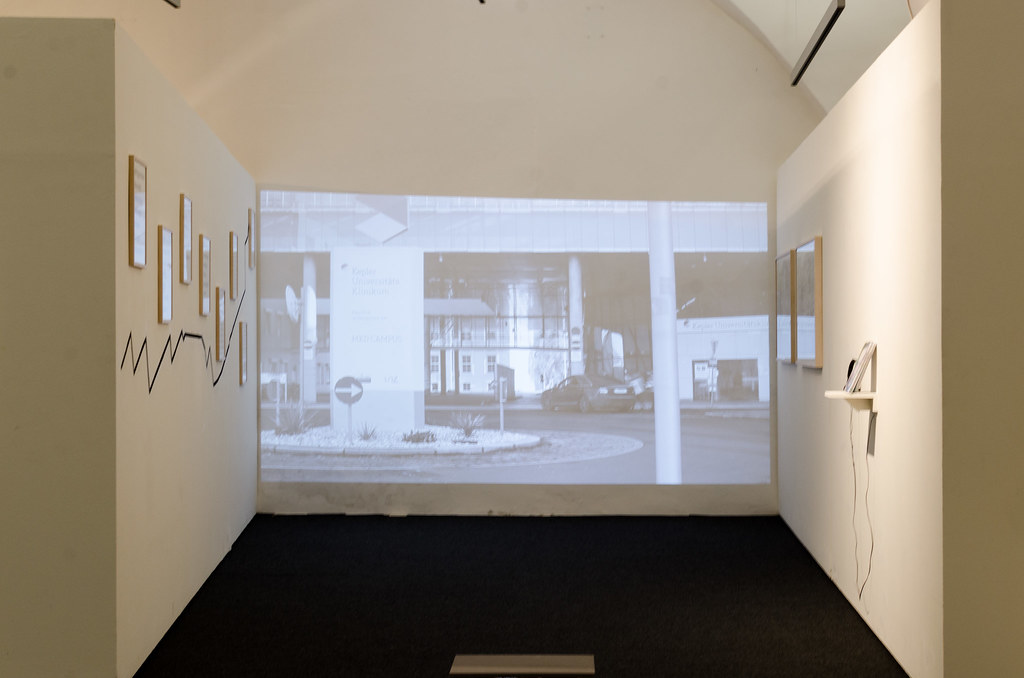 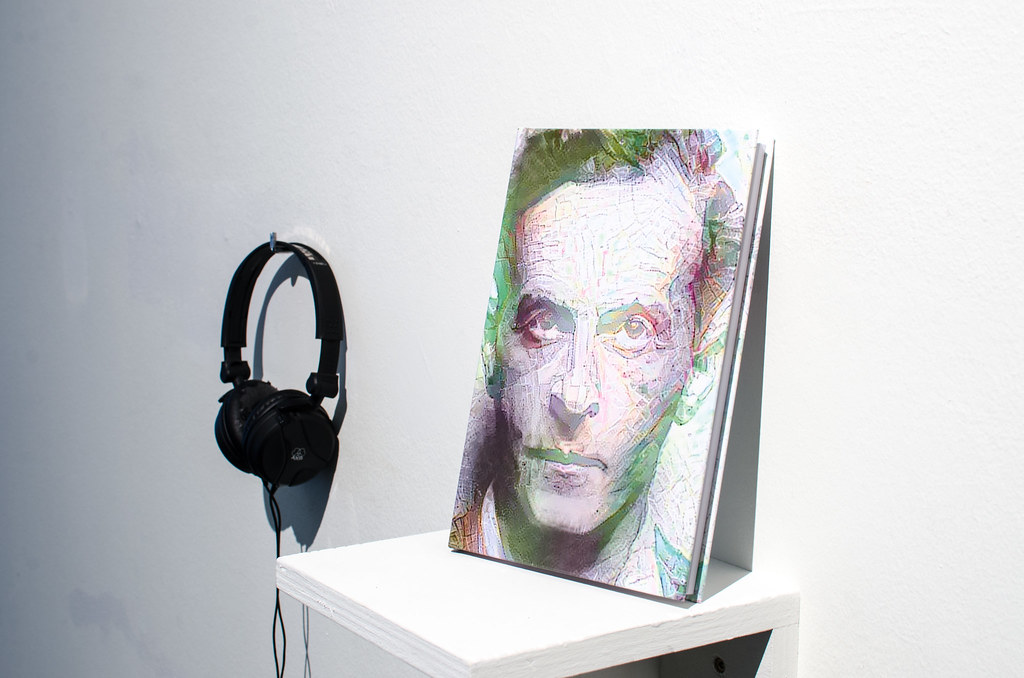 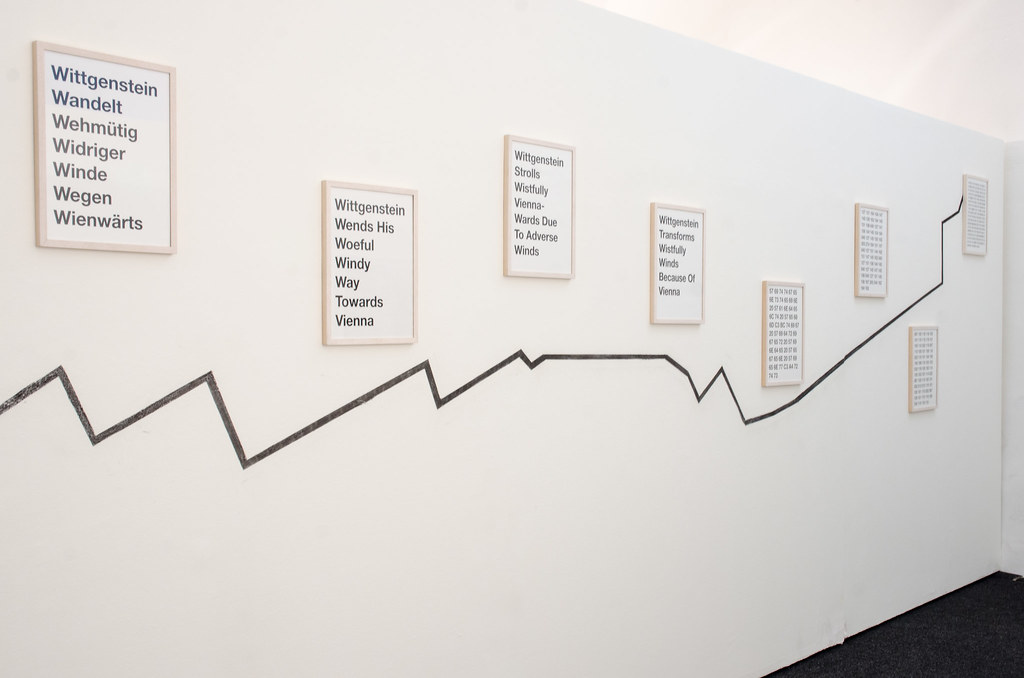 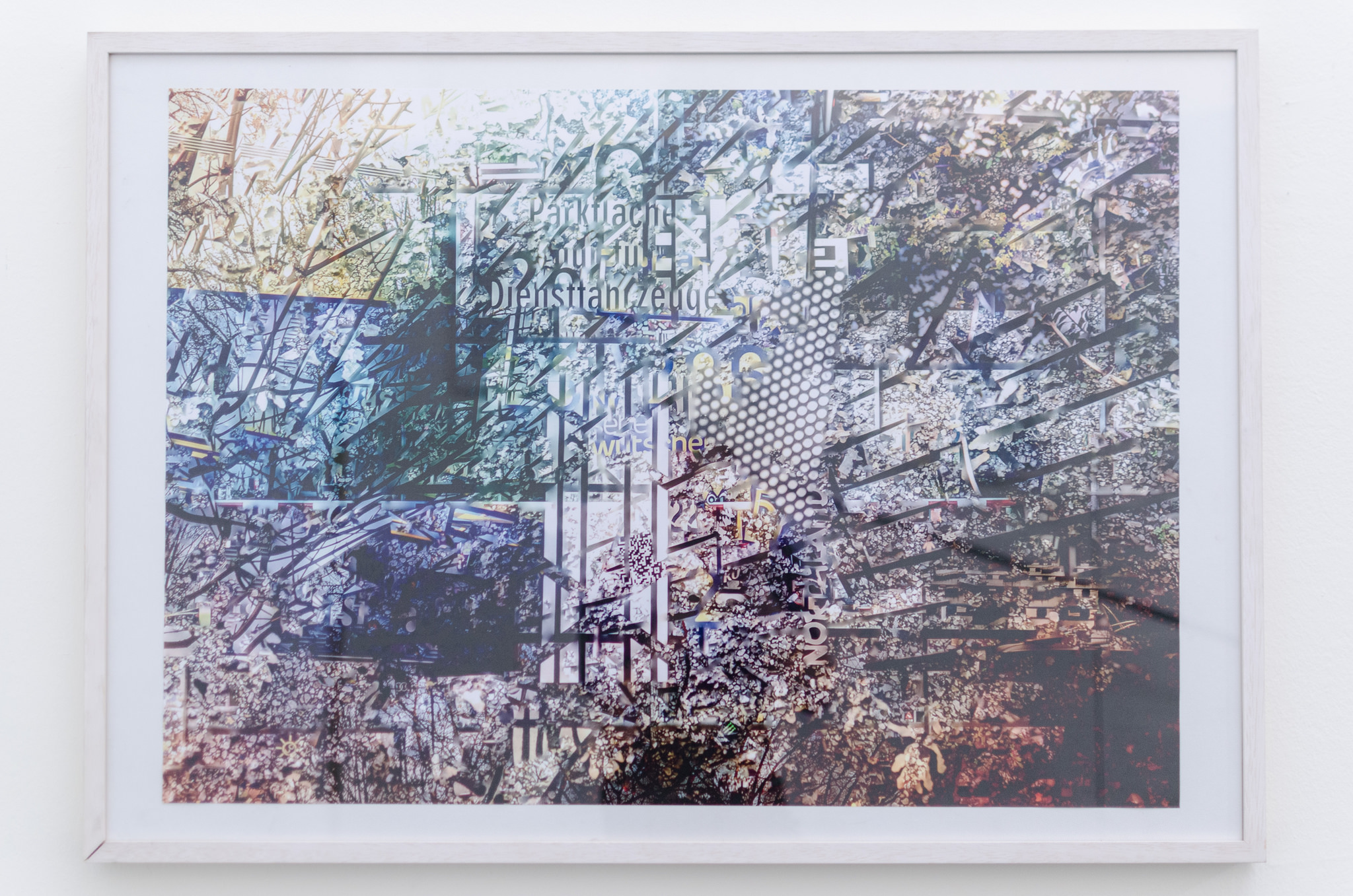 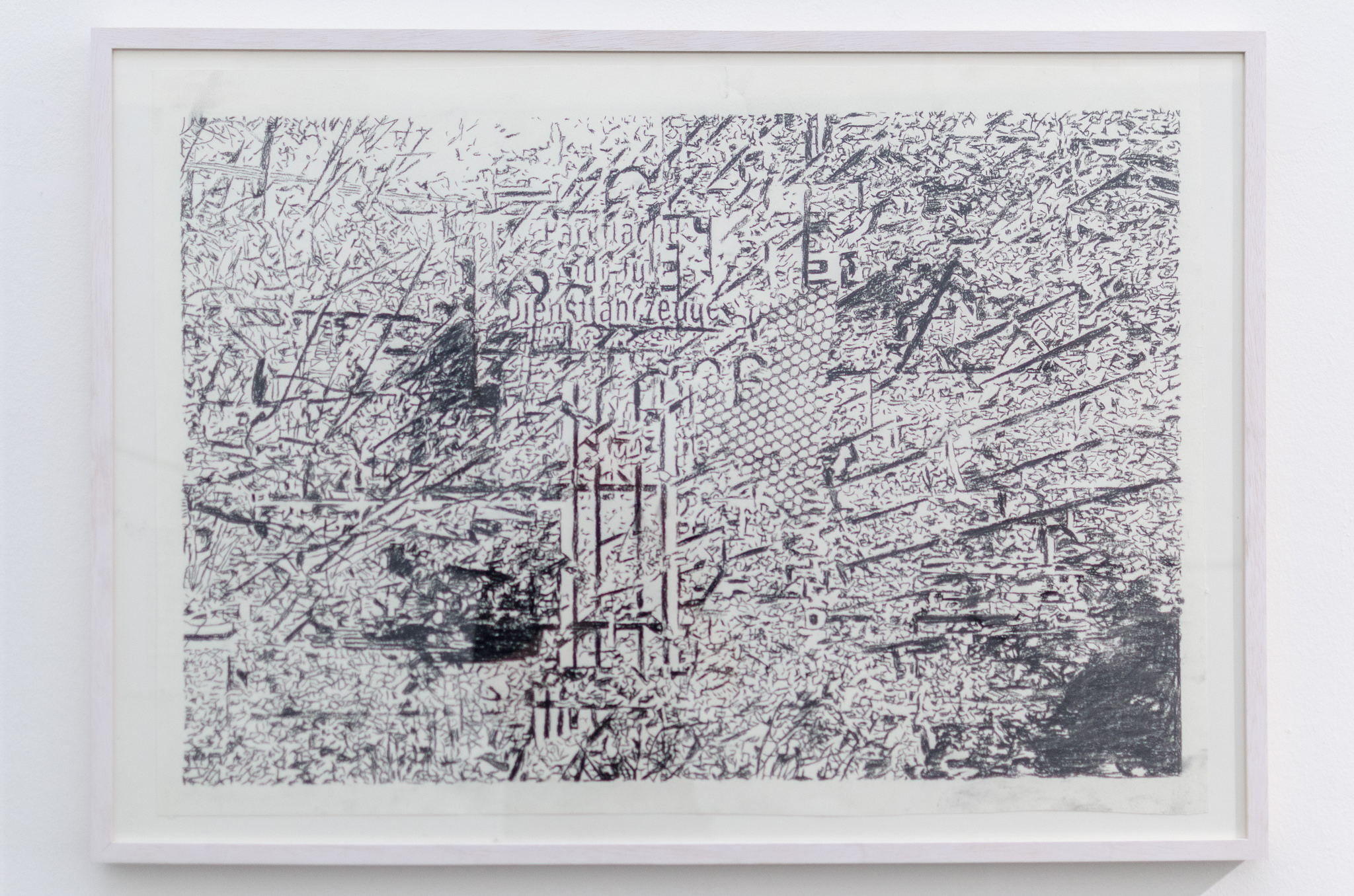